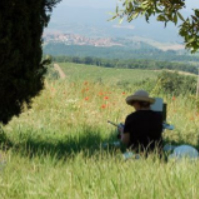 "She has an innate sense of color and composition and when it is coupled with the way she handles the media, magic occurs."   - Quote from Theresa Golas, Director of The Iredell Museums (Statesville, NC)  published in American Art Collector Magazine, August 2006.

Painter and Gallery Owner, Karen Hewitt Hagan, is living the quintessential life of an accomplished artist. The Florence, South Carolina native has taught plein air painting in Charleston, Italy, the Bahamas, and France. Currently she teaches privately in her Charleston Studios. She thoroughly enjoys owning the Hagan Fine Art Gallery and Studio in downtown Charleston, displaying her work alongside the paintings of artists from far-away lands such as Russia & Germany. Her own works are collected nationally as well and are in the permanent collection of fine resorts like The Sanctuary at Kiawah Island. Though she’s traveled the world, lived aboard a boat (aptly named Plein Air) for over 8 years, she says Charleston continues to be her calm, stable source of inspiration.

“If I were marooned in just one place on earth, I’d want it to be Charleston. It’s nirvana here…funky, very close knit among the artists. We all collaborate a lot, share models and paint together. That’s inspiring in itself, but to get to do that in a city that is filled with such stunning light and beauty is way beyond what anyone could hope for.”

With almost three decades of study of the masters, teaching and painting I describe my paintings as “painterly, loose, and juicy. They’re colorful, and hopefully, full of light. I guess most people call me an impressionistic landscape painter, but I resist putting titles on myself because I always want to explore. And while I hold true to traditional drawing and composition methods, I want to experiment and push the boundaries of painting.”

Hagan is also a breast cancer survivor. That ordeal drastically changed her perspective on her life and work. “I’ve had a whole lot of changes in the last decade; moving back to dry land, renovating a house, creating a gallery and remarrying.  I’ve found that my paintings always follow my heart, and what’s happening with my emotions usually flows through my brush.  I’m in a really good place now and feel very grateful to be healthy, especially happy, and painting every day!” says Hagan.

See all of Karen's available works